Skip to content
Time to Save : Experience More While Spending Less $$$

Menu
SIGN IN
JOIN NOW
Time to Save : Experience More While Spending Less $$$

Garrett & Alysha met at business school through an introduction from one of Garrett’s fraternity brothers. They started dating, fell in love, and never looked back. With no kids and no marriage initially, they both progressed quickly through Grad School, each obtaining their MBA’s, with Garrett’s in Architecture and Alysha’s in finance.

The two degrees complimented each other, and, with a loan from Alysha’s parents, they had a vision for starting a boutique design firm that focused on transforming individually owned Airbnb’s, through better design and floor plans, to increase the average daily rent an owner could charge.

It took them a little time to start bringing in clients, but once they got the first one, the ROI that resulted by being able to increase the average daily rent started attracting many more clients. Word of mouth continued to help them grow.

Their business took them all over the US, designing and then overseeing renovation work. So, travel and eating out made up a large part of their life.

One day they were heading out to Seattle for two projects. Alysha suggested they reach out to some friends of theirs that lived in Spokane to see if they wanted to meet them in Seattle for a couple of nights after they wrapped up their meetings. Their friends loved the idea and they decided to meet.

Garrett normally took care of booking their travel, so he did what he always did, searched and booked his hotel on one of the big OTA’s like Expedia, Priceline, Booking.com or, frankly, whichever had the cheapest rate. Here’s what Garrett’s search resulted in him finding: 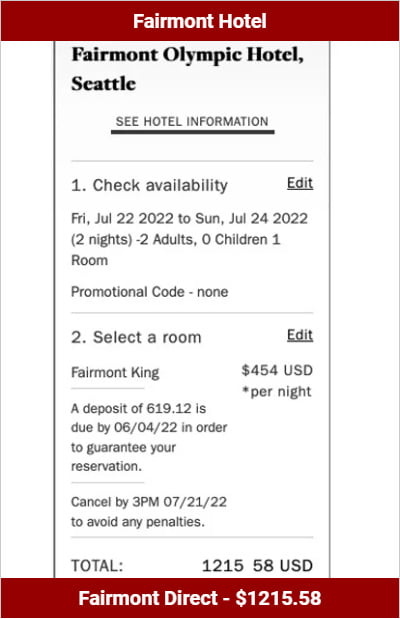 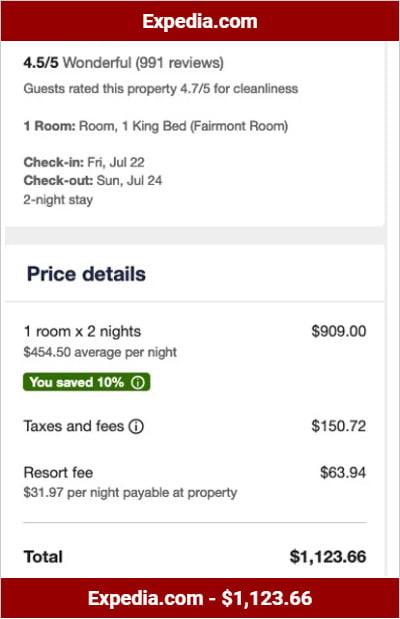 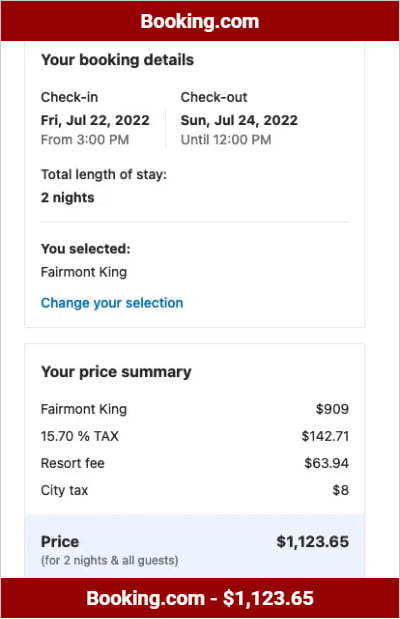 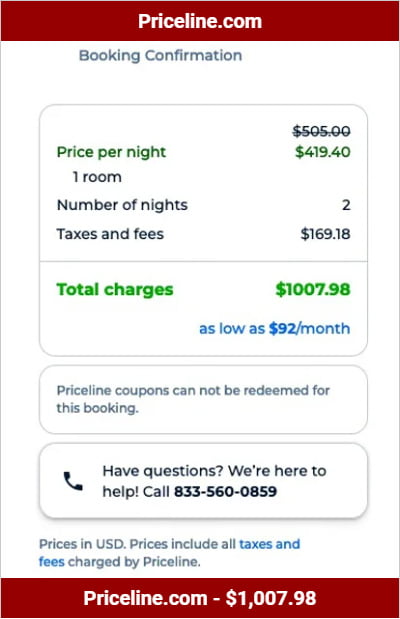 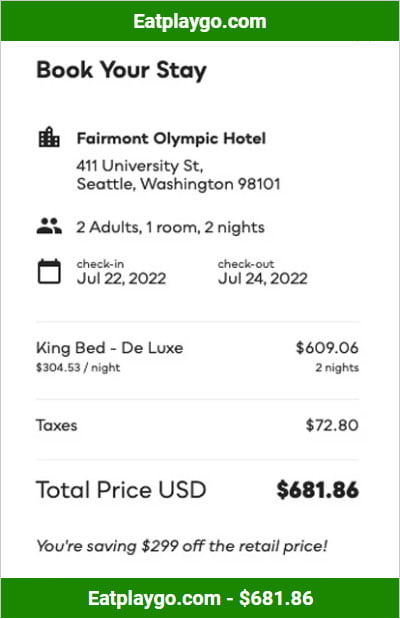 In keeping with his mantra to find the cheapest price, Garrett booked into the Fairmont using Priceline at $1,007.98.

Garrett reached out and texted his friends where they were staying so they could secure their rooms in the same hotel.

While they had very successful meetings with their clients, and landed both accounts, they were really looking forward to taking a couple of days to wind down and see this exciting city with their friends, whom they hadn’t seen for a couple of years.

They met their friends in the lobby bar, had a drink and started catching up on times gone by before they headed out to Chandler’s Crab House, a favorite local Seattle seafood restaurant down on the waterfront. They truly enjoyed their time together that evening, and next day they chartered a boat and went exploring out on Puget Sound.

On their final morning together, they met for breakfast before heading out for their respective flights home. Garrett asked his friend how they enjoyed the resort, to which they responded, it was awesome. Such a classy place, and we just couldn’t believe the rate we got.

Garrett, being the frugal guy he was, and the one who booked the hotel, couldn’t help but wonder how much they paid. Was there some deal that they got that he wasn’t aware of? Can’t be, he did his homework and he was confident that he got the cheapest rate.

Garrett proudly told his friend that he found a killer deal on Priceline for $1,007.98, and that included both nights, with all taxes, fees, etc. He asked his friend what they paid, and after hearing what Garrett paid, his friend was a little reluctant to tell him. But Garrett couldn’t stand it, and pressed him, so he told him that they paid $681.86, which was like 33% less.

Garrett nearly lost his mind – what? How the heck did you get that price, he asked? I scoured all the major booking sites, and I promise you that if that price was there, I would have found it. Well, his friend told him, that price was not listed on the Public Internet, it was only available through what they call closed user group pricing, but, that you had to have a private subscription to access those rates.

They were not available to the general public.

Now Garrett was really curious. You’re telling me you paid $326.12 less than me, on this one booking, and this rate is somehow private? Yep, his friend told him, but, he added, listen, you can do it too.

This happened to us about a year ago, we were traveling with some friends in New Orleans and they got a much better deal than we did, then they told us how. It’s called Eat, Play… Go!, – it’s a private subscription that is so affordable, I mean, we pay less than $100 a year, and we have access to cheap hotel rates at over 1 million of the top-rated hotels in the world.

So, this isn’t unusual for us at all. Hey, let me do you a favor and I’ll send you a link so you can check it out for free for 7 days. If you like it, join, and start saving money not only on hotels, but they also have all kinds of other discounts like restaurants, theme parks, movie theaters, and so much more.

We’ve been in for about a year now, and we’ve saved a small fortune. Give it try, and maybe next time we meet, I won’t have to tell you how we paid so much less than you. 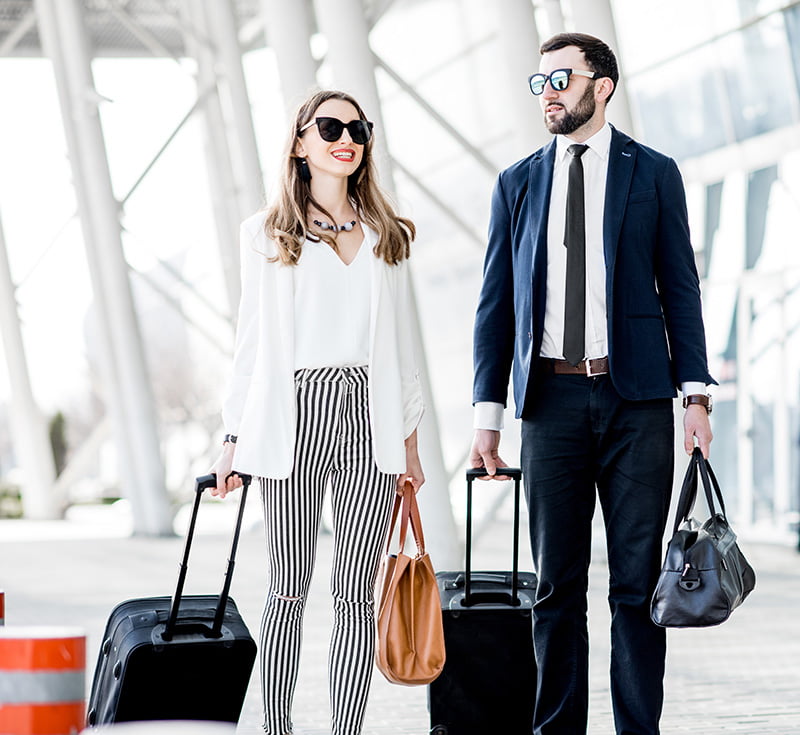 Employee Perks & Rewards – What are They and do They Work?

Are your Lifestyle Benefits Inclusive? Where DEI and Discount Programs Intersect

Save Soil. A Cause With A Planetary Purpose

You're just one step away from accessing all of the Eat, Play... Go! range of savings benefits. Please make a selection below.

Is there anything better than sharing a great experience with friends & family?

Actually, there is! Getting paid for doing it!

Boom! It’s just our way of saying thanks for helping us spread the word about Eat, Play… Go!

Get exclusive private access to special rates and discounts on hotels, airlines, car rentals, theme park tickets, everyday purchases, and more. You won’t find these rates on Expedia, Priceline, Booking.com – or anywhere else on the public Internet.

Search like you normally would on any other booking site. Just click the tab you’re interested in, plug in the dates and hit search. It’s that easy.

Book with us and save with our exclusive private rates. Marriott, Hyatt, Hilton, the major airlines, car rental agencies – all the top-brands are here, but at prices you won’t find anywhere else.

Access all our Benefits Completely Free of Charge for 14 Days

Enter your email address and we will send you a one click instant login link.

Save in These Categories

For One Small Fee You Get to Save Everywhere

Previous
Next
HOW TO GET STARTED

You’ll save on your booking now PLUS additional discounts on all sorts of other things, like dining out, groceries, car rentals, theme park tickets, shopping, everyday expenses, and a whole lot more.

Enter Your Coupon Code and "Click To Get Started"

You Could Save Hundreds on Travel

You’ll save on your booking hotels and airfare, PLUS additional discounts on all sorts of other things, like dining out, groceries, car rentals, theme park tickets, shopping, everyday expenses, and a whole lot more.

Welcome back. Please remember to send us your feedback, as we are always looking to improve. And oh… tell your friends. You can make good referral commission for doing so.

Pass it on ... Share 2 Weeks Free with a Friend

No Thanks. Skip This Step For Now

Enter the name and email address of someone you know, and we will send them a nicely crafted invitation email on your behalf, sharing the benefits of Eat, Play… Go! platform, along with their own 2 week free pass.

Your Registration is Being Submitted

Enter Your Name and Email Address for Instant Site Access

✔️ Access all our Benefits Completely Free of Charge for 7 Days

Having access to our site doesn’t mean you have to invite your friends, but if you do, and they sign up you earn $$. Click here to Learn more about this option.